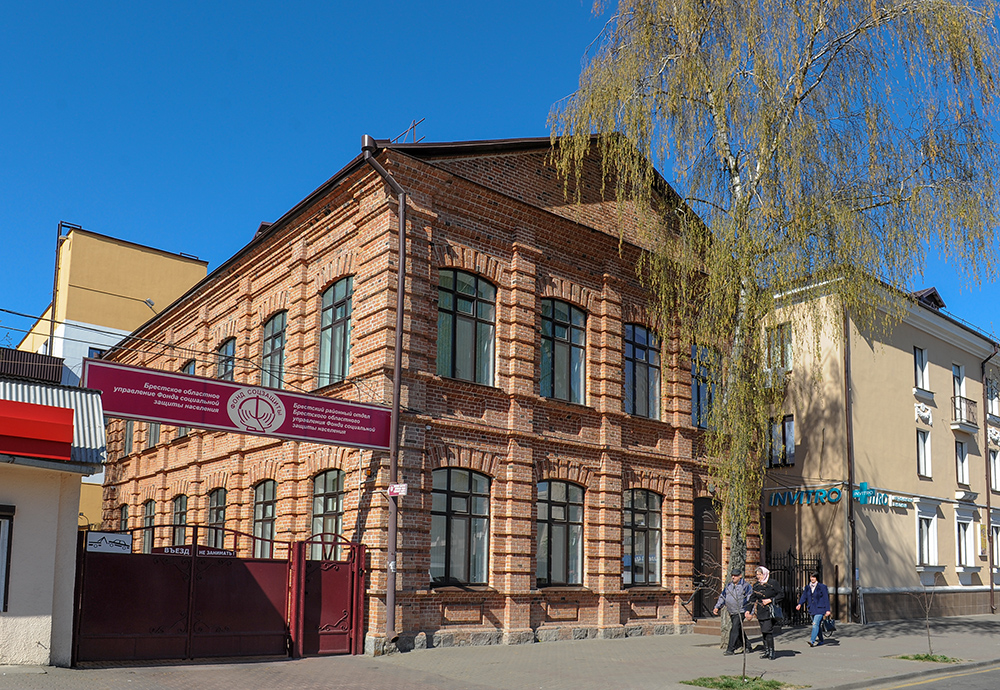 In May 1941, I finished the 1st form of secondary school No. 5 in Brest. In early October 1944, shortly upon my return from Saratov to Brest, I entered the 5th form of the same school, but now incomplete secondary school No. 5 in Brest. I walked along the familiar, but hardly recognizable streets of Brest to my new school on Kuibyshev St.(formerly Dluga St.). The school was located in the busiest part of the city next to the city bazaar or, as it was called, the Small Bazaar, although actually it was the largest market in the city with its own flea market. Now this place is the bus station square. The flea market occupied the intersection of Kuibyshev Str. and Mitskevich Str. 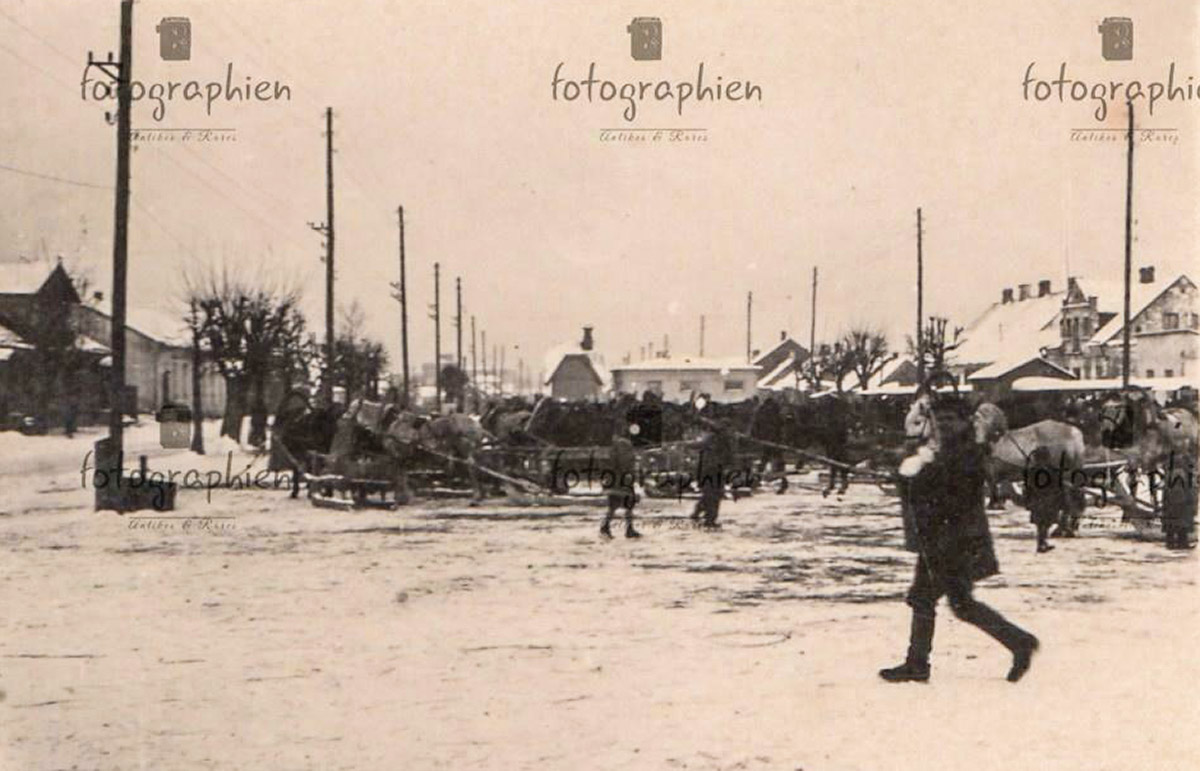 The “Small Bazaar” in the days of Nazi occupation

The biggest place for admiration was the building of my pre-war school No. 5, the former Russian gymnasium (classical school) named after Tsarevich Alexei, built in 1905. From 1920 to autumn 1939, it housed the Polish gymnasium named after R. Traugutt. The domes of St. Nicholas Church, built in 1906 on the site of an old wooden church that burned down during the fire of 1895, towered over the market and over all nearby houses. The new church was erected using funds raised mostly by parishioners, the Orthodox brotherhood, hence it became better known as the Brotherhood Church. 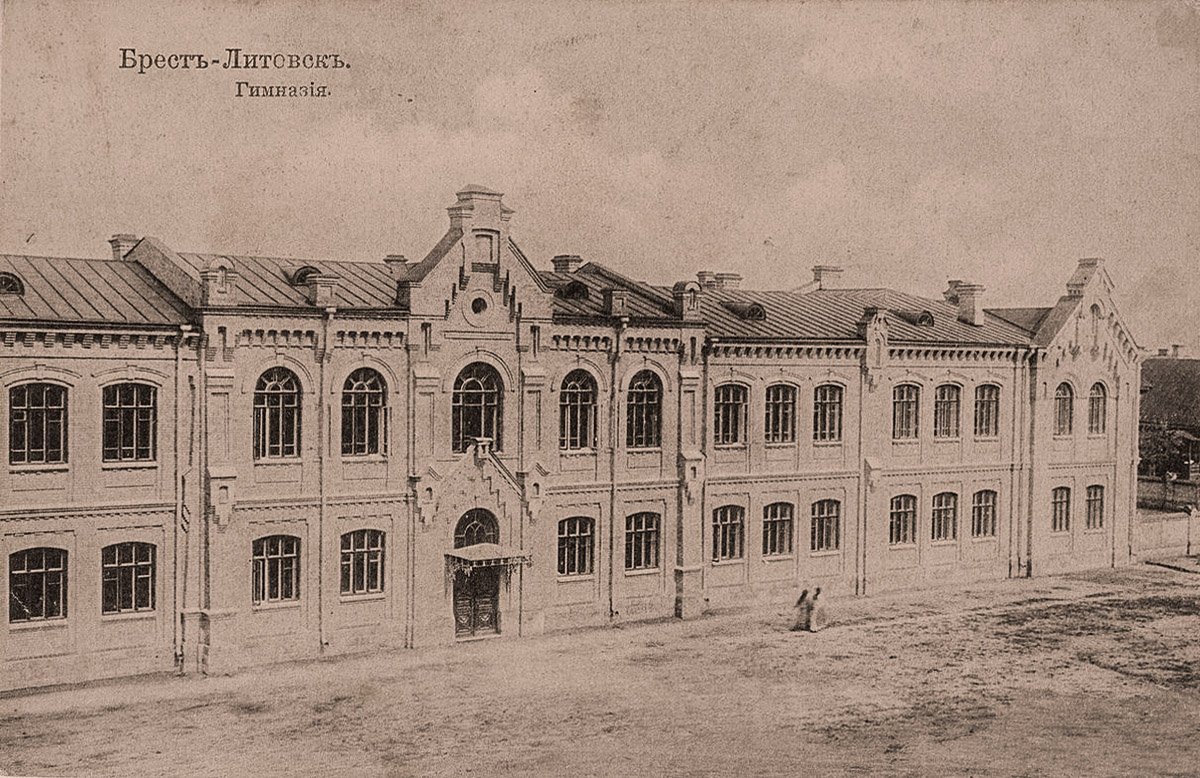 My new school was located in the building of the very first Russian gymnasium (classical school) in Brest-Litovsk, built in 1899 on the site of the Brotherhood Church. A small two-story brick building with its windows looked cheerfully to the south – towards the disappeared Bratskiy Lane later and then Shkolny Lane, to the east – to Dluga Street and Kuibyshev Str. From that building further on the school yard stretched to Mitskevich Street. The width of the yard was confined to the wooden church fence and a wooden fence along Kuibyshev Str. and Mitskevich Str. It’s common to perceive what you see for the first time as if it has been existing permanently. This is how I saw the vast schoolyard, when I visited it for the first time on an October day. It was a very large yard. The surface of the courtyard was quite flat, with grass growing only along the church fence. Next to it, an earthwork rose, covering a small bomb shelter with a door constantly locked, and a lonely wooden boom – the only “fresh” structure. 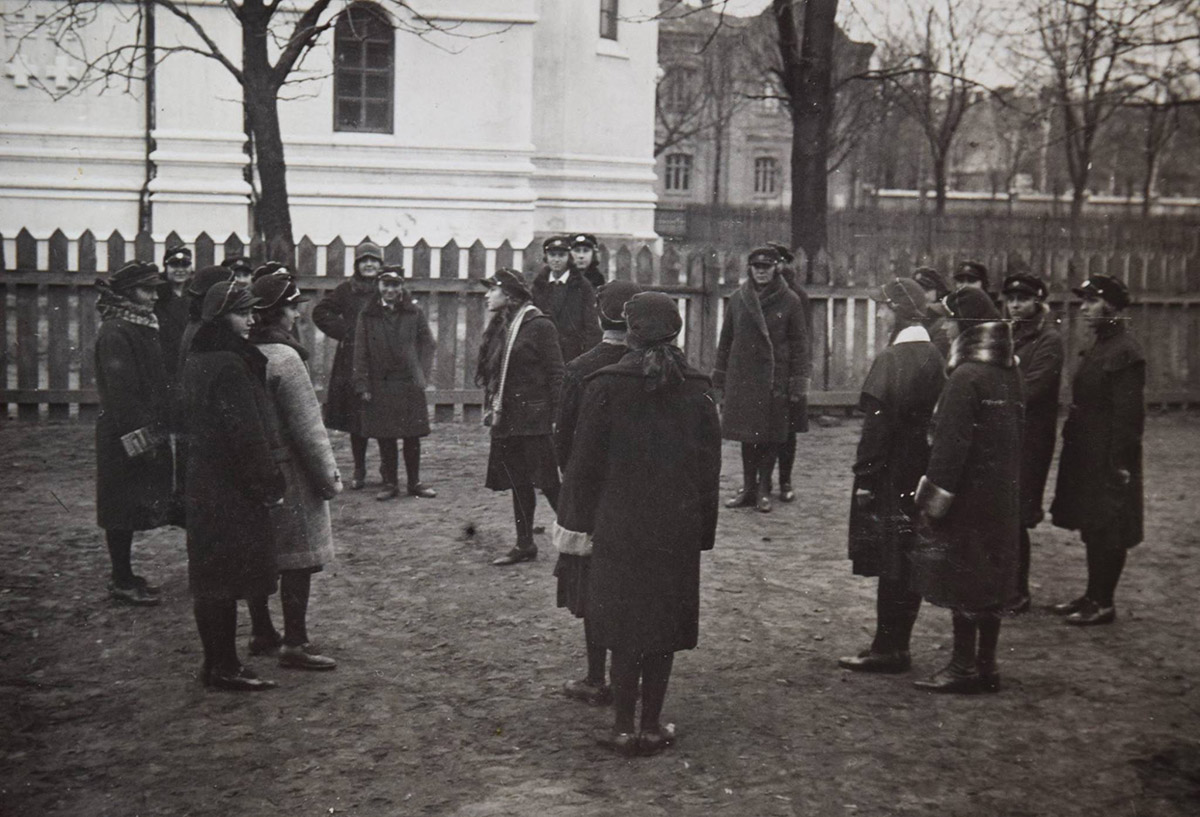 Students of the Brest Russian gymnasium playing near the St. Nicholas Church. Photo from the home album of the Belevets family.

The first Russian gymnasium was built in 1899 on a site that belonged to the Brotherhood Church. Two wooden houses had already been built on it: one along Kuibyshev Street, the second one along the church fence. Subsequently, they were comprised by the complex of gymnasium buildings, which housed the elementary classes of the gymnasium and the kindergarten. Between those two buildings there was a small yard, which was bordered on the north side by a two-story stone house built much later with a facade facing Mitskevich Street. That was a sort of school complex or today it would be called a school campus. By October 1944, there was no trace of these structures, no hint of their former existence, except for one on that school campus.

The building of the Brest Russian gymnasium.

The air raids of the city by Soviet aviation began with increasing force in the spring of 1944. Perhaps, in one of the first raids, the school buildings of the gymnasium were destroyed. Since they were located on the church land under the care of the community, it was decided to clear the site from the ruins, though two buildings survived. In those days, the priest in charge of the Fraternal Church was a graduate of the Russian gymnasium Mitrofan Znosko, who succeeded his father, priest Konstantin Znosko, who died in 1943. 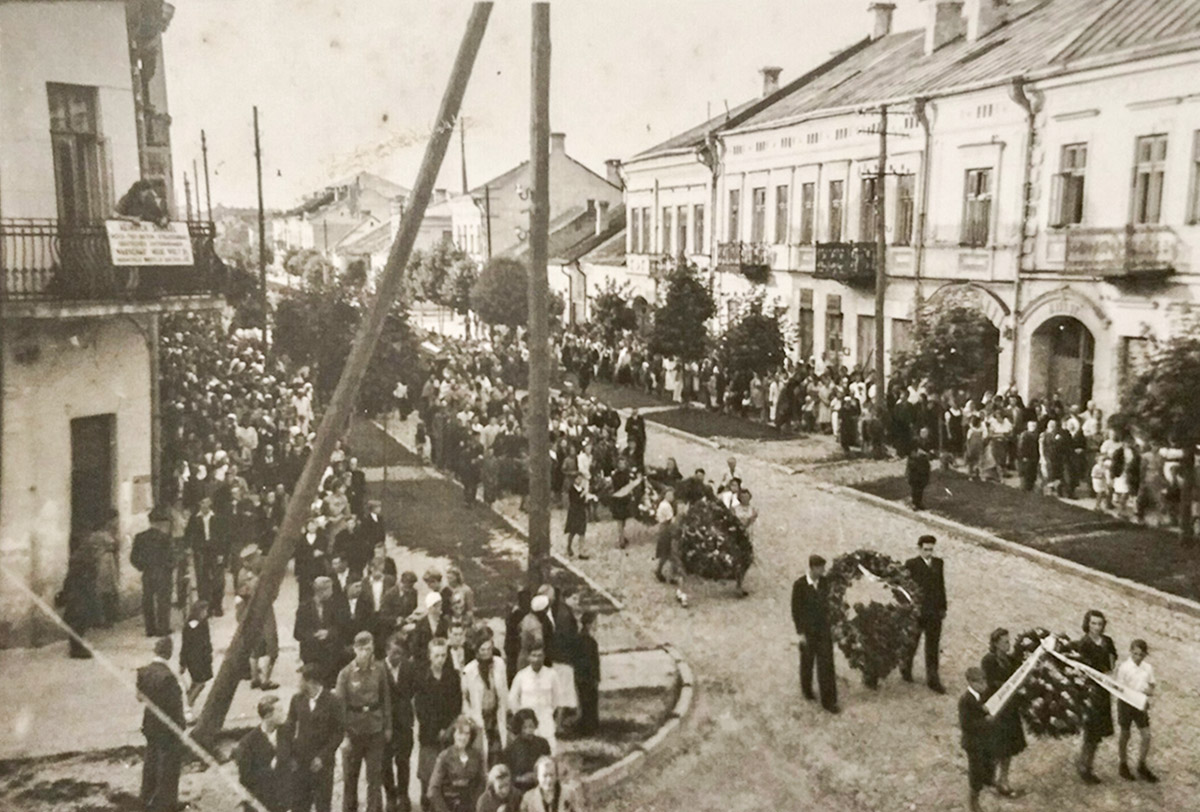 Funeral of Archpriest Konstantin Znosko. Brest-Litovsk, June 1943. It was prohibited to walk through the arched passages of the buildings on the street, which are visible in the photo on the right, as they were leading to the area of the Jewish ghetto, which was guarded even after its prisoners were killed. The photo from the collection of Ivan Chaichits.

During the war, a German hospital was located in the Russian gymnasium in Mitskevich Str. I do not know, who occupied the building of my future school. The buildings of both Russian classical schools and the Fraternal Church miraculously survived the fires of the summer of 1944, but were surrounded on all sides by ruins and conflagrations. After the liberation of Brest, many of the surviving school buildings were occupied by hospitals: the building of the former gymnasium in Mickevich Str., the building of the Jewish school in Pushkinskaya Street, the railway school in Kievka. There were not enough teachers, especially in the Belarusian language. It was incredibly difficult to bring children back to school after the three-year “vacation”. As for the age, those schoolchildren were children, but in terms of their acquired life experience, they were adults, on becoming wise in the struggle for survival. 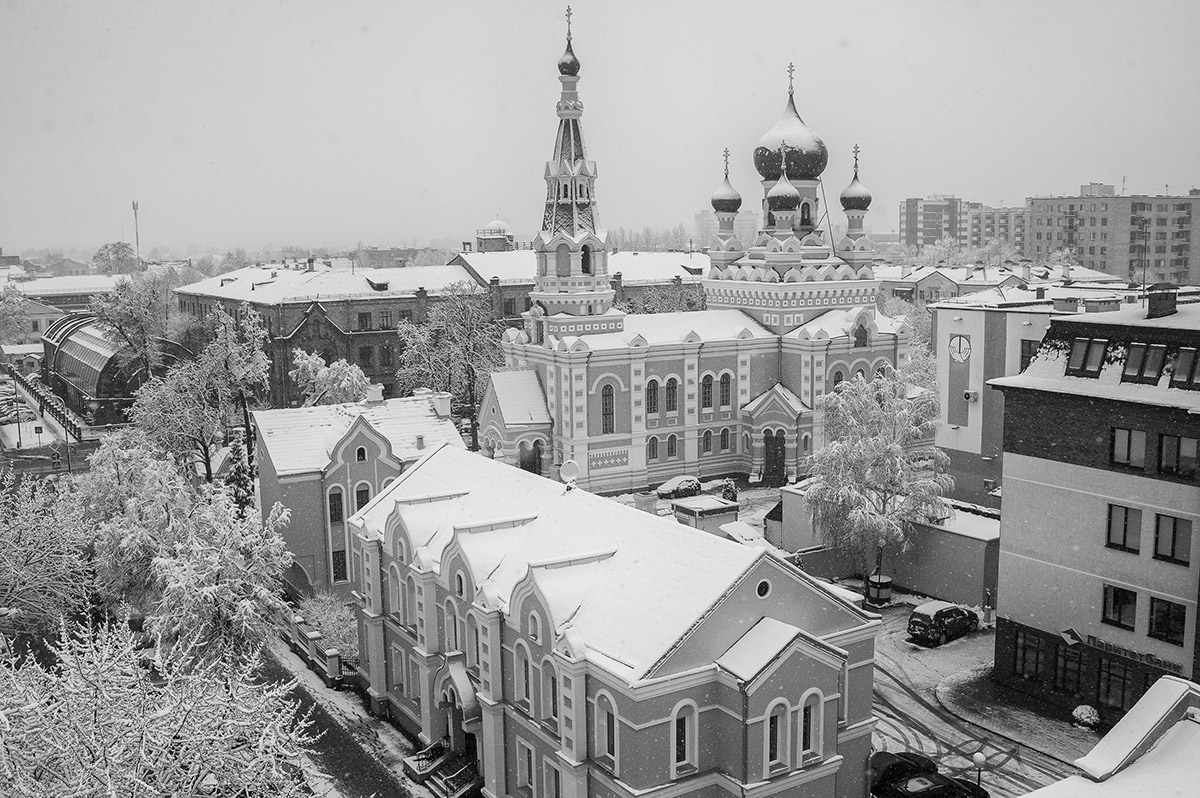 What is on the site of my school today? Being squeezed on all sides by factory buildings, dormitories, cars today, being abandoned and empty, but not losing its originality, the school building looks like a random old guest at a modern get-together. Being sad and modest, it keeps the memory of the past generations of young people, cheerful young boys and girls, adolescents, toddlers, of all those whom it sheltered, warmed and guided in the years of their lives with hopes and dreams.

from the memories of V. Gubenko

Translated from Russian by Oleg Medvedevski