76 years ago, Brest was liberated from Nazi occupation. Since then, at least four generations of Brest residents have been born, living under a peaceful sky. The city carefully preserves the memory of those who gave their lives while performing military duty, protecting their homeland and fighting the enemy with weapons in their hands. We honour them.

However, the history of Brest holds another tragic page related to the mass destruction of almost half of the local civilian population of the city during the Nazi occupation. These were Jewish people.

Jewish people appeared on the territory of modern Belarus in the 14th century, at the time of the Grand Duchy of Lithuania (GDL) – this was during the mass migration of entire communities from Western Europe to the more tolerant and accepting at the time, Poland and GDL. In the 16th century, Jews received practically equal rights with local citizens. Soon after the divisions of the Polish-Lithuanian Commonwealth, according to the decree of Empress Catherine II, a “pale of settlement” was introduced to the entire Jewish population, which allowed Jews to live in strictly defined places on the territory of the Russian Empire. As a result, Jewish people made up the majority in almost all Belarusian cities and towns.

In the 1920s and early 30s, Yiddish, Belarusian, Polish and Russian were the official languages of the BSSR. There were Jewish schools, a developed Yiddish culture, even a Jewish branch of the Institute of Belarusian Culture.

During the Nazi occupation (1941–1944), about a million Jewish people died on Belarusian soil. There are more than 300 extermination points in the country and one of these places is the Brest Ghetto. 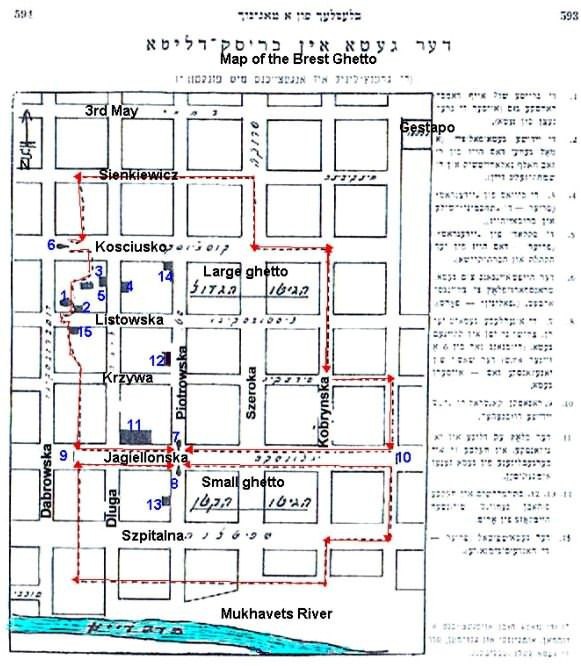 Mass executions of Jewish people started in the first days after the occupation of Brest. At the end of June/beginning of July 1941, between 4000 and 5000 Jews were shot. The Nazis took the possibility of Jewish resistance very seriously and therefore primarily killed Jewish men aged 15 to 50 before the Ghetto was even created.

On December 16, 1941, the entire Jewish population of Brest (approx. 20,000 people) was imprisoned in the Ghetto. The Ghetto was located within the borders of the present streets of Sovetskaya, Mayakovskogo, Kirov and Internatsionalnaya. The territory of the Ghetto was divided by Moskovskaya Street (the Warsaw-Minsk highway) into two unequal parts: the larger, located in the north, and the smaller in the south.

It was fenced with barbed wire and guarded by patrols. Entry and exit for prisoners without special permission was prohibited and anyone trying to escape faced, best-case scenario, prison, usually however it resulted in execution. There were three gates in the Ghetto overlooking the streets of Moscovskaya, Sovetskaya and Gogol. In conditions of chronic starvation and exhausting labour, the inhabitants of the Ghetto quickly reached a state of physical exhaustion, fell ill and were dying in large numbers. 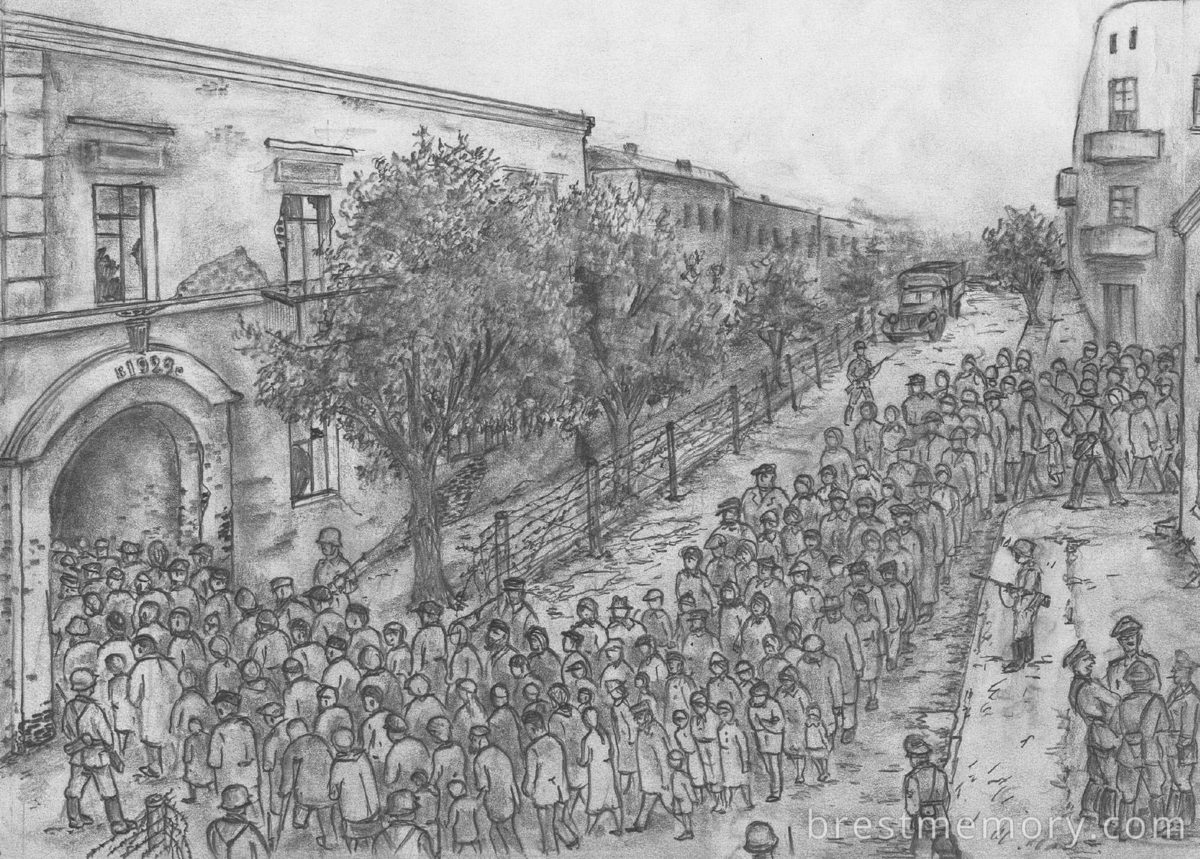 On October 15 began the liquidation of the Brest Ghetto. People were driven out and led in rows to Tovarnaya station, where they were met with ready-made freight cars. Consequently, from October 15 to October 18, 1942, approximately 17,000 Jewish people were taken to the area of the village of Bronnaya Gora (about 100 km northeast of Brest) and executed.

After the majority of Ghetto prisoners was murdered on Bronnaya Gora, the Nazis proceeded to raid the men, women, the elderly, and children who managed to hide in various caches, attics and basements of houses in the Ghetto.

Streets were scattered with bodies of those unlucky to be found. Fugitives were amassed on Ostrovsky Street, from where they were driven to the execution point across Sovetskaya Street. All the prisoners passed through the arch, which has survived to this day, ending their lives in the hastily dug firing holes of the Ghetto courtyards.

Mass executions also took place at the junction of Masherov and Kuibyshev streets, in the courtyard of house No. 126 on Dolgaya Street (now between Kuibyshev and Karbyshev streets). A further 5,000 Jews were shot near the hospital on Internatsionalnaya Street. Some 90 Jewish children were also killed in Orphanage No. 2, and another 64 Jews in a nursing home.

By the end of 1942, the Jewish population of Brest ceased to exist. Miraculously, only a few survived. Those who were killed had ancestors who contributed to the prosperity and world fame of Brest, who, regardless of the often-changing authorities and governments, loved this multinational, multilingual and multi-cultural city. Unarmed, weak, starved of hunger, filled with hopelessness and fear, the elderly, children, women and men were mercilessly exterminated only because they were Jews.

With the almost complete disappearance of Jewish people, there was no one left to tell this hugely important part of Brest’s story, no one to pass on the memory to and no one to honour the dead. 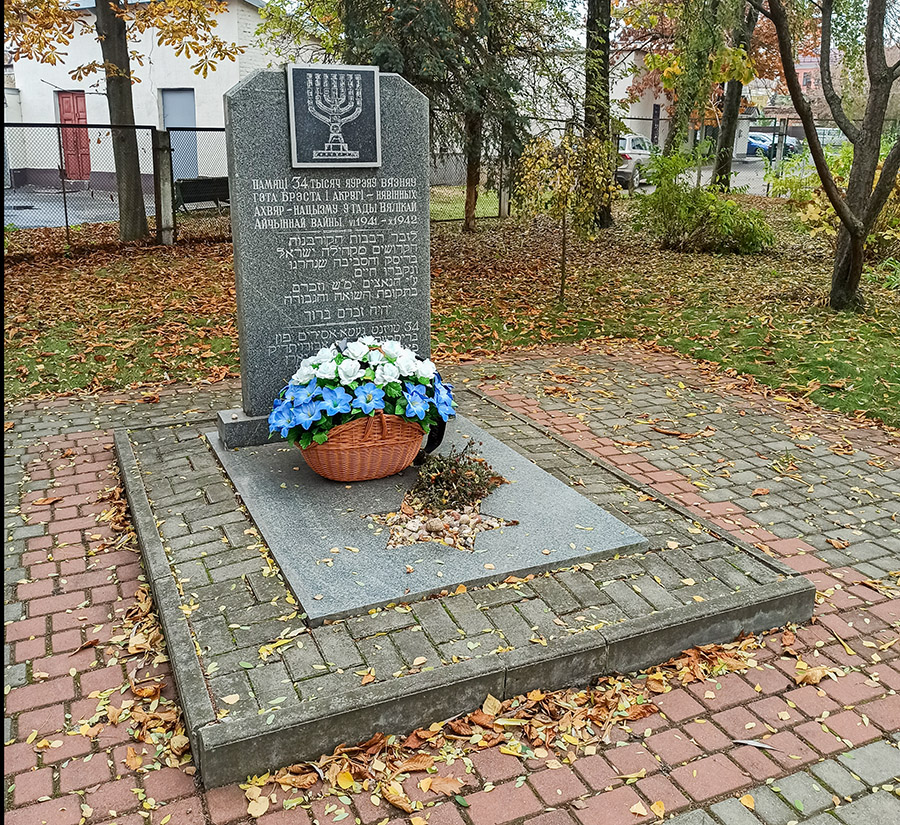 Some effort has been made by local government to preserve the memory of local Holocaust victims. A memorial plaque was recently installed at the cinema “Belarus”, through the initiative of the head of the city administration, informing passers-by that it used to be the Great Choral Synagogue. 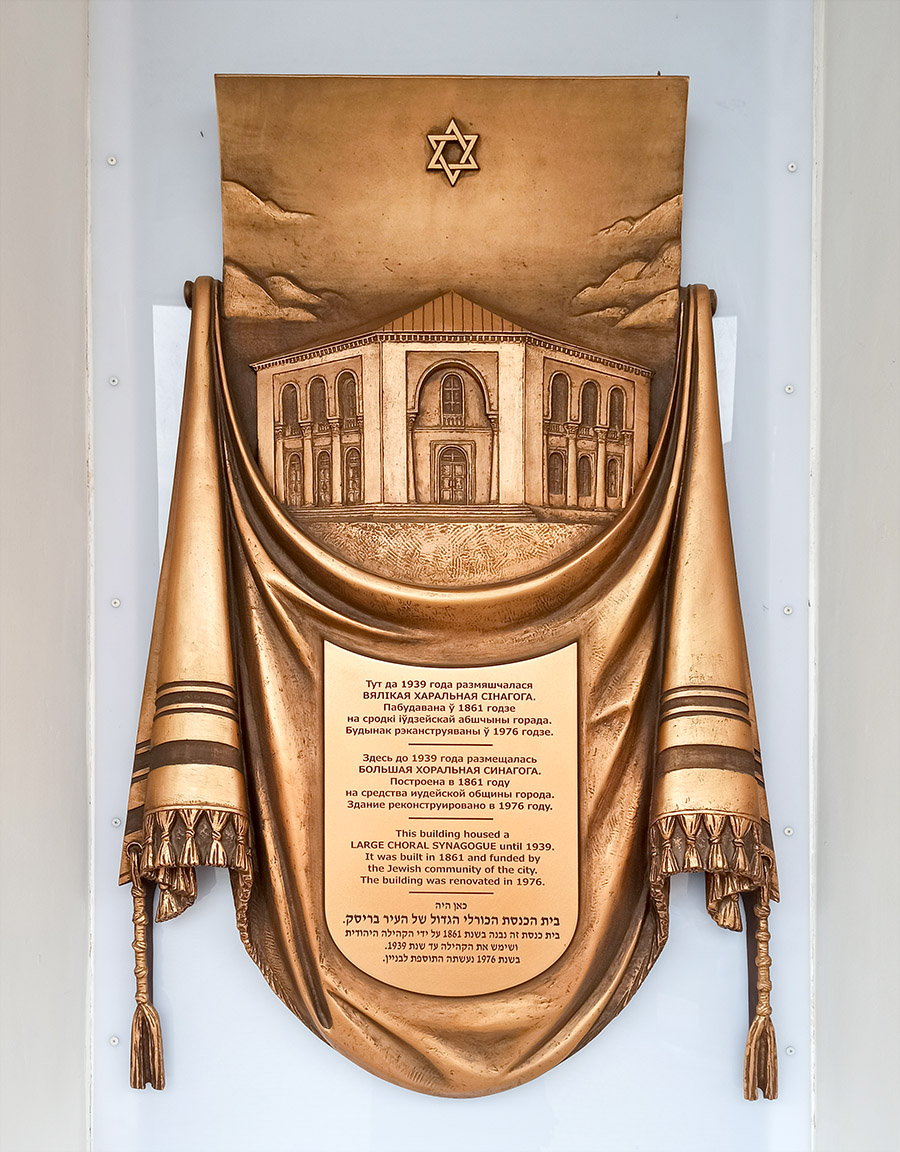 However, this currently only serves to reveal the story on a small scale, when there is so much more to educate all Brest residents about the unique history of their hometown and also increase interest and stimulate an informative cause for tourists and those visiting the city.

In early 2019, Brest became the object of close attention of domestic and international media related to the discovery of the remains of 1,214 prisoners of the Brest Ghetto, during the construction of the Pribuzhsky Quarter, and the subsequent funeral ceremony for their burial in the Northern Cemetery. The ceremony was vastly attended by members of the city’s leadership, headed by the chairman of the city executive committee A.S. Rogachuk, various representatives of diplomatic missions to Germany, Poland, Russia, the United States, Ukraine, the Czech Republic and other countries, numerous members of Jewish public associations and Jewish religious communities from Israel and Belarus and all those who considered it their duty to honour the memory of innocent victims.

Notably, A.S. Rogachuk said: “We plan to position the Brest Fortress as a symbol of courage and rebuff to the Nazis, and the slaughter of victims of the Brest Ghetto as a symbol of the tragedy of World War II”

These recent developments suggest that the installation of a memorial sign for the “Brest Ghetto” is becoming even more urgent and pertinent. Such a sign will become a symbol of memory, a landmark place of information and education, it will not only increase respect for our city amongst visitors, but will also spark awareness in residents about mistakes that cannot be made again. 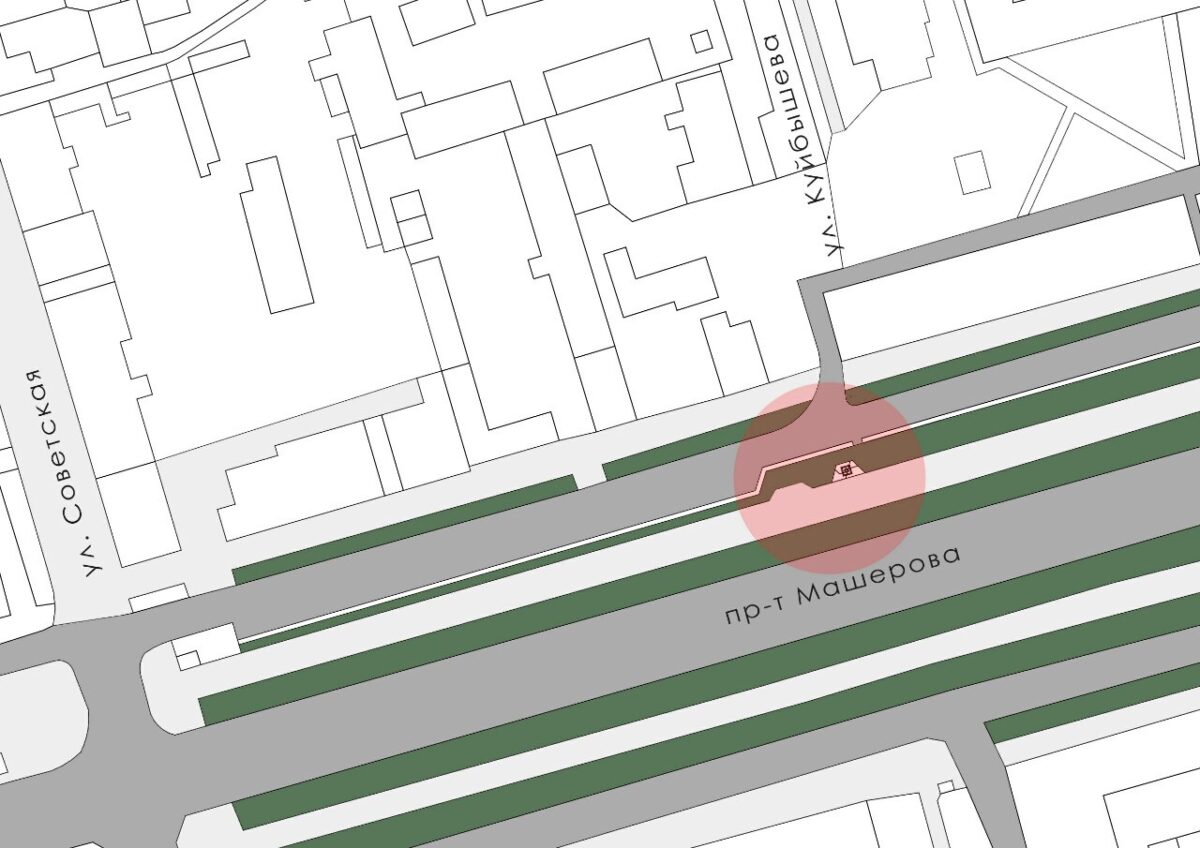 First project
Second project
The reproduction of brestmemory.com materials is possible only with the written permission of the publisher. Write to e-mail
An active direct hyperlink to the brestmemory.com page containing the original publication is required. This link should be placed at the beginning of the reprinted material.
Any changes to texts, headings, photographs during reprint are prohibited.