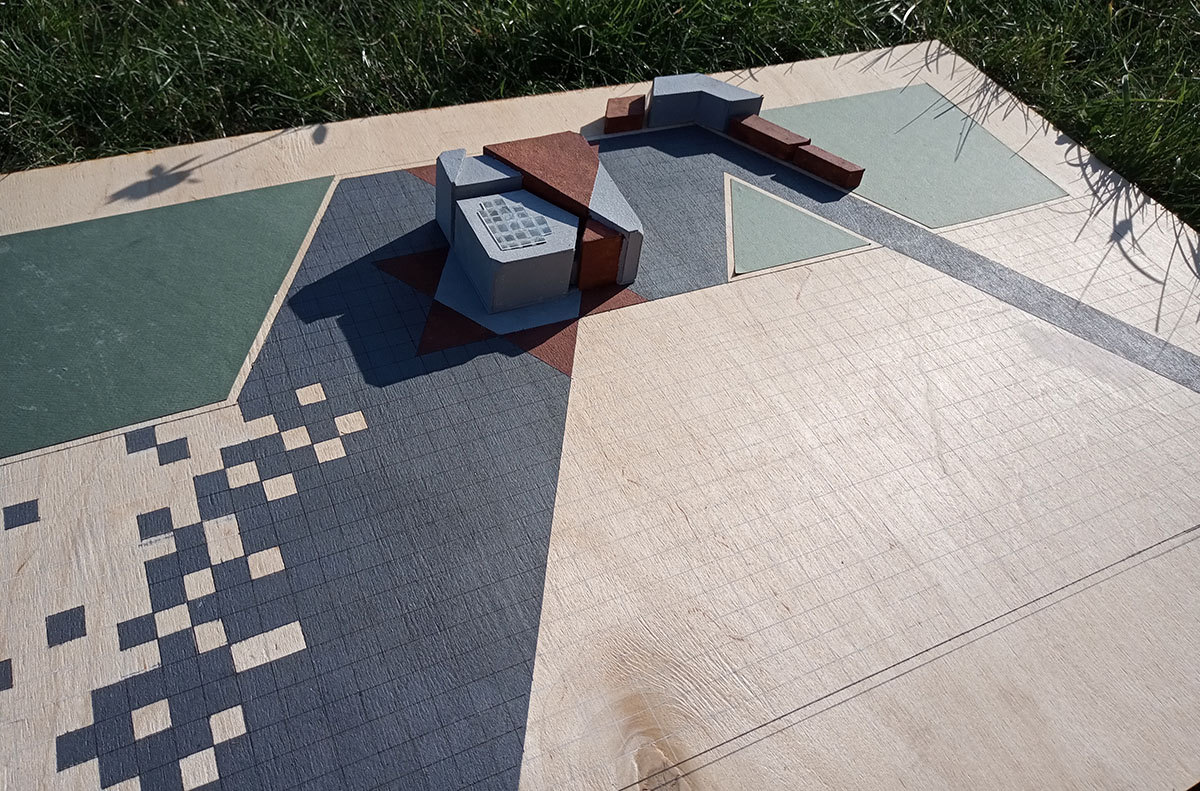 The memorial sign itself is based on a simple cubic form, divided into several segments, each of which carries a certain notional load. A simple, clear, basic form symbolises the cohesion and resilience of the nation, which has not been lost despite all attempts to divide, devastate and destroy it.

Among the segments, there are 2 main ones. The first is a horizontal plane, engraved with a map of districts within the boundaries of the Brest Ghetto. These districts are marked with rectangular planks and backlighting, symbolising hope in the hearts of all those who were awaiting their fate while being in this territory during the time of the Holocaust. The main streets are signed in Belarusian and repeated in the Latin alphabet. The location of the monument in the structure of the city and the Brest Ghetto is also indicated.

The second segment depicts an hourglass, the upper part of which contains information about the monument in three languages (Belarusian, English and Hebrew). This part is also a symbol characteristic of Jewish culture – the menorah. This particular arrangement of the text has its meaning in this memorial sign, namely that history is similar to time flowing away with grains of sand in a timepiece. It is extremely important to know and remember this history.

The object is harmoniously integrated into the environment of the city. Located on one of the main streets, it is carried out from the main pedestrian paths a little to the side, without shouting about its existence nor intruding on the importance of the peaceful life of citizens. However, with the help of landscaping and changing the colour scheme of paving slabs, it attracts attention of people passing by. In fact, it is part of a small set-up, which includes landscaping, places for recreation and a variety of coverings.

The memorial sign itself is merged to its surroundings with one extremely important detail. It stands on a paving element in the shape of the star of David. This is part of the monument itself, standing out due to the use of various materials. At the same time, one of the rays of the star, located on the ground, serves as a pointer to the entrance to the shooting yards and is accentuated with backlighting.

The commemorative sign is made of two main materials. The luminosity and severity of granite is emphasised by a dark crimson corroded metal, included both in the memorial sign itself and in its surroundings. It also uses milk-coloured polycarbonate in all elements containing backlighting, such as the blocks on the monument and a pointer to the entrance of the shooting yards. Additionally, the pavement is highlighted with dark tiles.